People Are Sharing Wild Stories Of Going To The Hospital For Having Something Stuck Up Their Butt, And Fair Warning, It Gets Graphic

8. The dog toy that probably should’ve remained just that.

“One evening of quite inebriated play and some rather vigorous activity from the Mrs. led to the harness coming loose — though there was a ‘base’ on the toy; it was soft and the whole thing was pulled up into my butt. No problem. Just push it out, right? Nope, the damn thing ascended and because it was soft managed to take a hard left and lodge itself in the transverse part of plumbing.

After about a day of trying different approaches to getting it out, I had to ring a proctologist at a local hospital and ask some uncomfortable questions about whether there would be any official trouble if I came into the hospital with something needing to be removed. He assured me there was no problem.

Quick prep for outpatient surgery; they put me under general anesthesia and apparently it was quite easy to remove once my body was completely relaxed. I woke up a few hours later in recovery and the nurses were all giving me odd looks; but the doctor said everything was great and I should be fine; he did encourage me to be more careful in the future.

“That’s when I noticed something on the foot of the bed next to my leg. They’d bagged the toy in a bright yellow biohazard bag and asked if I wanted it back. That was mortifying. (I declined the souvenir.)

“Insurance wouldn’t cover it — ended up costing about $3,500 — most expensive sex mistake ever.” 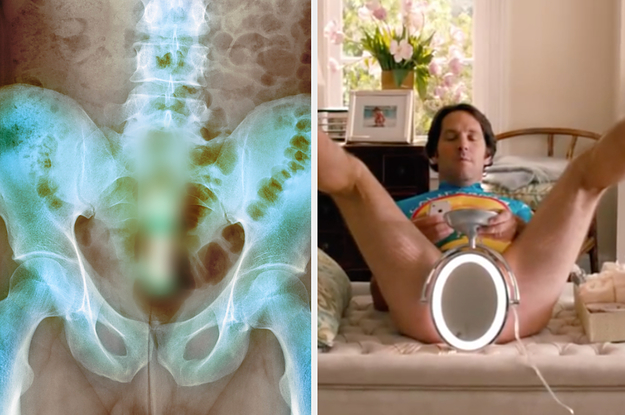